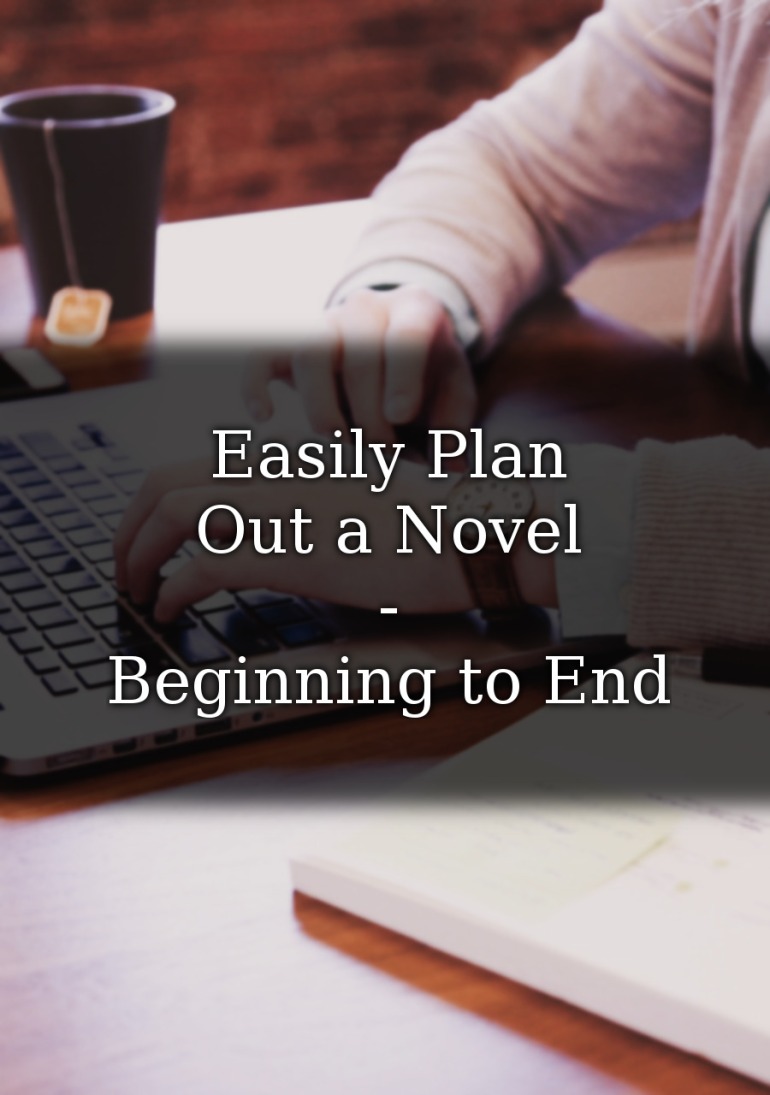 Planning out a novel is a challenging task, but I hope to make it easier for you. I have some experience with outlining, as I have worked on numerous outlines, and am currently working on one in my spare time. I find that I cannot start writing if I don’t have a brief outline of the major story milestones prepared.

If you are a sworn seat-of-the-pants writer, who wants to avoid outlines at all costs, this blog post probably isn’t for you. If you love outlining and want to find a new method for it, or if you’re unsure of whether or not outlining is for you, read on and give it a try!

The way I learned it, there are several milestones in your story, that take place over four sections. The four sections can fit over the three-act plot structure, if that’s what you’re used to.

These story milestones are:

The nice thing about these story milestones are that they work in both a three-act structure and a four-part structure, which allows for ease of understanding. The image below shows how they fit within both kinds of structures.

If you don’t already know, the difference between a three-act structure and a four-part structure is this:

Despite the difference of a second act becoming two parts, all the story milestones are the same, so I’ll only have to explain them once. For simplicity’s sake, I’m just going to refer to the sections of the story by part, not by act. If you need to, you can refer back to the diagram above.

This is your first scene. It introduces your reader to the novel, and it begins the first part of the story, so you’d better make the opening a good one.

This is what draws your reader in and keeps them reading. Your hook can take place in your opening scene, in fact it would be a very good idea to have a hook there, as the earlier a hook is placed, the better. As a general rule-of-thumb, get your hook in before page 10.

The inciting incident happens at the middle of the first part. It gives your character a problem, and their reaction to the problem is what leads them to the first plot point.

And here lies the end of the first part. But the second part is born, rising from the ashes of the first. If the hero thought the inciting incident is bad, they’re going to have to run for their life now (perhaps literally), because things have gotten ten times worse. The problem introduced in the first plot point will be the main problem of the story.

Don’t worry if you don’t know what a pinch point is, I find it’s rarely mentioned as a story milestone. It’s simply a glimpse of the true antagonistic force that drives the story. The first pinch point takes place in the middle of the second part. Though it may be just a glimpse, it helps increase the stakes and the story’s tension.

This is the plot twist in the middle of the book, the thing that makes the reader gasp and think that 200 more pages is worth it, even though it’s already midnight and they have work or school in the morning. The midpoint closes off the second part and launches the third, and it gives the hero some of the knowledge or skill that they need to vanquish the villain.

Another glimpse at the antagonistic force, to increase the (already high) stakes and tension. This takes place in the middle of the third part.

The hero needs a bit more knowledge and/or skill to defeat the villain. The second plot point is when it is gained. In the third part, the hero was attacking weakly, but in the fourth and final part, the hero should be willing to die for their cause. The hero has what they need, they should start using it.

The last scene. Almost everything should be wrapped up in a bundle for the reader. Unless you’re planning a series or leaving things to be questioned as a stylistic choice.

What To Do With This

So now you know all of those story milestones, but you probably don’t know what to do with them. All you have is an idea, and you want to know how to make a story out of that idea.

The first step is to turn it into a what-if question.

For example, here is an idea for a story:

There is an alternate earth, where magic exists. The separation between the twin universes has cracks, and your main character just fell through one.

That writing prompt, when phrased as a few what-if questions:

What if there is an alternate earth where magic exists? What if the separation between the universes has cracks that allow passage through one world, into another? What if the main character fell through one of those cracks?

After you have phrased your idea as a what-if question, see if any others follow. Continuing with the magic earth idea:

Opening: MC falls through one of the cracks between the two universes, and ends up in a world where magic exists. (The hook is in the opening, as entering an alternate universe is a pretty good way to grab the reader’s attention.)

Inciting Incident: MC finds out that he was forced into the normal world because his exile would end some political strife, but now that he’s back, he’s at risk of being killed to continue the peace. (Pretty strong inciting incident, right away the MC’s life is at risk.)

First Plot Point: The MC has managed to stay alive, but now the war has resumed. Everyone still wants him dead, but the war has allowed for some distractions, as crime rates have gone up, protests are happening in every major city, and trying to win the war has taken up a lot of resources. The MC feels as if all of this is his fault, and so he decides that he must be the one to stop it. He just doesn’t know how.

As you can see, with just a few what-if questions, it’s possible to have the first quarter of your story planned out, at least for major milestones. To get to the end, you just continue to ask what-if questions and see if they work as story elements.

You probably won’t want to leave the outline as just the first one you come up with. After all, for the example that I was using, magic doesn’t really come into play so it’d be better to just cut that concept out.

Depending on your writing style, you may prefer to leave things pretty loose, that way you can have fun with it and see where your imagination takes you. In that case, planning out only the major milestones, and leaving them a bit vague at that, will allow for a lot of spontaneous creativity.

If you prefer to outline in more depth start outlining the major subplot milestones. After that you can plan out what will specifically happen in the scenes before and after the milestones. You can also plan out subplots, and before you know it, you’ll have a very in-depth outline.

Go with whatever style suits you. When you’re finished, you’ll have an entire story planned out, from start to finish. Depending on how creative or how energetic you are, this kind of planning won’t take too long, as it’s designed to keep the brain thinking about what could happen next.

If you’re reading this because you plan on doing NaNoWriMo, you’re in luck, as I have a blog post that’ll help you plan for the month of November, helping rid you of some anticipation for the event.

3 thoughts on “Easily Plan Out a Novel – Beginning to End”