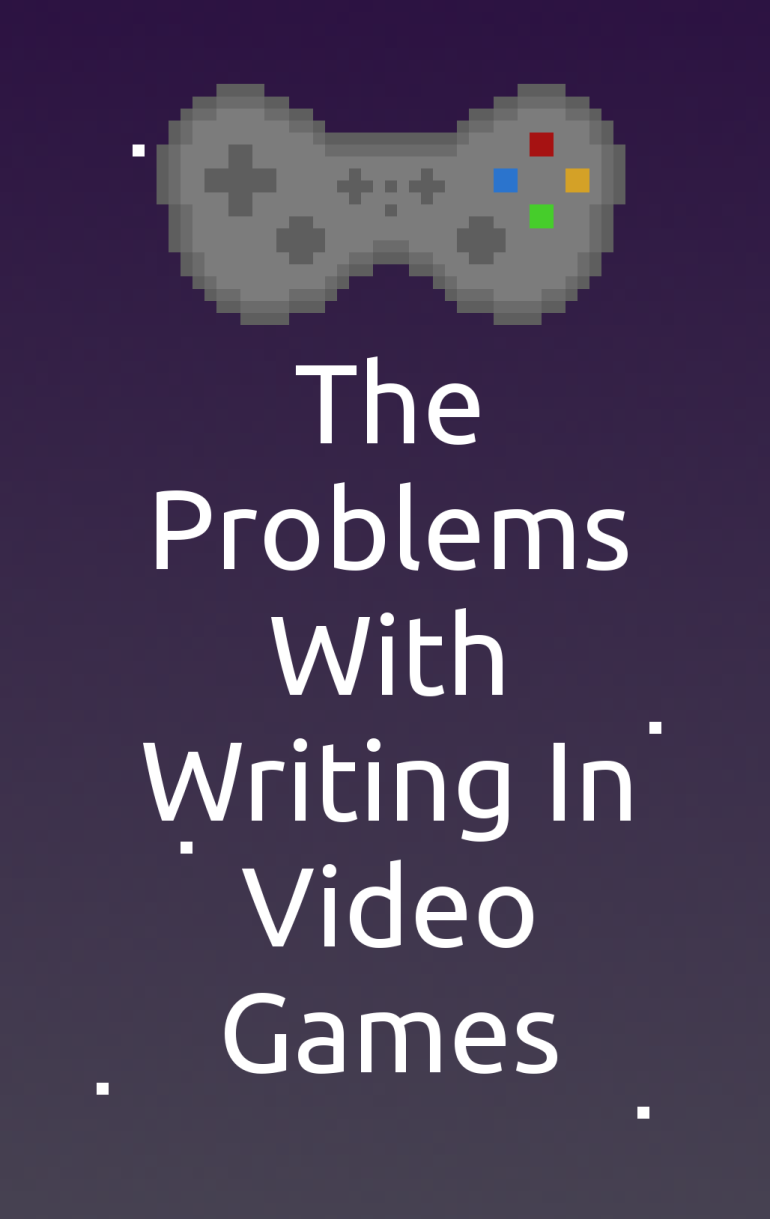 I absolutely adore video games. I think that they are a wonderful medium for storytelling, as they allow for the player to interact with various plots, characters and settings.

Even though I love video games, and the medium they offer for telling stories, I do think that there are some major problems when it comes to the writing in some games.

I’ll focus on the three areas that I think need to be improved.

The most annoying thing about video game dialogue is that it is completely disconnected from other parts of the story.

Often, games will have a few different story lines going on. The problem is that characters will almost never comment on them! It’s as if the characters only care about one thing: the story line that they’re connected to.

This causes the characters to feel unrealistic, as they seem one-dimensional and unaware of anything else going on in the world they live in.

While it is alright, and perfectly normal, to have a few characters who aren’t aware of what’s going on around them, having all or most characters that ignorant makes the world seem flat.

Another problem with the writing in video games is the characters themselves.

Besides flat characters who have an interest in only one thing, often characters have an unbalanced affect on story lines.

In a book or movie every character that is there, is there for a reason. Those reasons could be to advance the story line, help the protagonist, help the antagonist, etc.

In video games, you’ll often find characters who don’t do anything to advance any story lines. They’re just there to make the game seem more full.

In most cases, the player needs to join the guild/faction/quest line before they can even talk to those other characters about why they joined, and so there is no point in having those characters try to convince the player to join.

I would much rather have fewer characters who have more affect on the story line, than multiple characters who do nothing but stand around spouting filler dialogue.

Overall, I find the story lines in games to be rather enjoyable, as they often involve complex worlds and interesting interactivity.

One of the things that I dislike is the disconnect between story lines.

In great novels, movies, and TV shows, subplots and secondary storylines tie in or in some way influence the main storyline.

Often in video games, smaller storylines and sidequests are completely disconnected from other storylines.

The other problem I find in video game writing is poor (or too much) exposition. Sometimes games get away with it by having ‘amnesia’ characters, or the option to not listen to exposition in the first place.

Often, games can have environmental story telling, which is when the backstory is hidden inside the video game world. This allows players to seek out the information on their own terms, and also allows them to draw their own conclusions from what they learn.

The solution to many of these problems is to have the writers give input on the game design earlier on, as most of these happen because of how difficult it is to implement the better writing into games that have already been designed.

If you enjoy video games or writing, feel free to leave a comment and discuss your opinions on the writing in video games.

2 thoughts on “The Problems With Writing in Video Games”