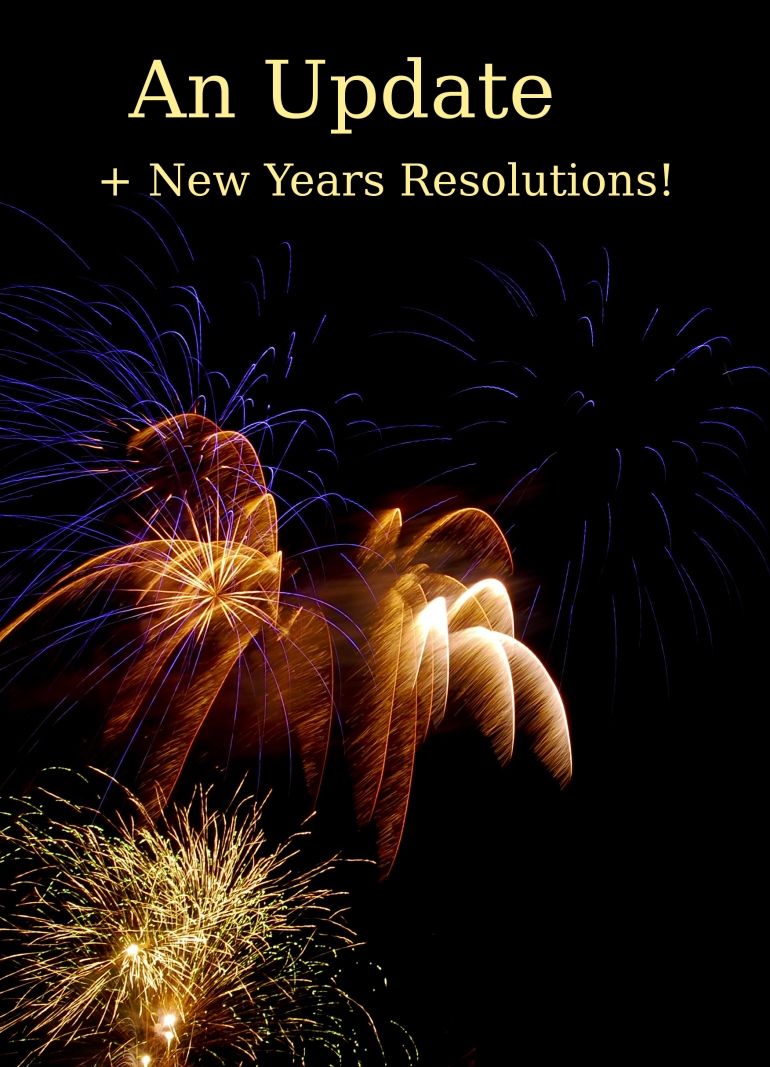 My December blogging break has finished with the arrival of January and the new year. Before I begin, I just want to say that I hope everyone had fun over the holidays! I enjoyed a nice Christmas dinner with my family and ate a lot of food. I also got some fun presents and gave some handmade ones.

I originally took a break from blogging to rest from burnout, recover from illness, catch up on some of the work that I was behind on, and prepare for the holidays, and I have to say that the break paid off. I am no longer burnt out, and I have recovered from my mysterious illness.

I’m also happy that I am able to say that I got a good portion of work finished. While I wasn’t expecting to be able to complete all of the projects I wanted to, the amount of work I that I did do met my expectations.

At the end of November I outlined six projects that I wanted to work on during December, two of which were art projects, three were writing, and one was a series of knitting projects to give as Christmas presents.

I completed all of the knitting projects (and did a new one to learn new techniques), and I finished one of the art projects. While I didn’t do nearly as much writing as I was hoping to do, I wasn’t pushing myself very hard for fear of increasing my burn out.

Now that I am back to my usual levels of creativity, enthusiasm, and determination, I’ll be doing a lot of writing during 2018.

With the new year, comes new resolutions! For many people, the change of year provides an opportunity to make some positive changes in ones life or to set some goals.

Even though I don’t usually complete them, I do enjoy setting goals for myself at the beginning of each year! It provides a good challenge for me, as I have difficulties seeing projects through to completion.

Each time I make a goal and stick with it until the end, I find it makes me more confident, and so I hope to complete at least half of my new years resolutions this year! These resolutions range from large projects that will take months to complete to simpler goals that could be completed in just a few hours.

It probably isn’t surprising that most of my resolutions have to do with writing, as writing is something that I hope to one day make a career out of.

1. Write a second draft of my NaNoWriMo 2017 novel

For those of you who do not know, NaNoWriMo stands for National Novel Writing Month and it’s an annual event that takes place in November. The goal is to write a 50,000 word novel in the course of a month.

During 2017 I participated and wrote a 50,000 word novel, a first draft riddled with plot holes, one dimensional characters, and terrible descriptions.

During 2018 I want to write a second draft and hopefully fix most of the plot problems and develop better characters.

This will be a long term project, but it should be very rewarding.

2. Rewrite (or at least plan a rewrite of) time travel novel

A few years ago I wrote a novel about time travel. I don’t remember much about the story other than its basic plot, but I still have that novel backed up, so I want to read it and then rewrite it. Or at the very least, plan out a rewrite of it.

As with the second draft of my NaNoWriMo 2017 novel, this will take a while to do, but it should be equally rewarding.

3. Knit myself a sweater

I absolutely love sweaters! They are my favorite kind of clothing, but I have never knit myself one. Hopefully I’ll be able to change that this year. While I do not know if I have the skill level to complete a nice cardigan or pullover, I certainly want to try.

4. Learn how to cook a full meal

While I do know how to cook and bake certain things, for example rice, pancakes, biscuits, etc., I don’t know how to make a full meal. To change that, this year I want to learn how to make an appetizer, a soup, a main course, and a side dish!

This will be a challenging task, but a fun one as I love to experiment in the kitchen.

This is a huge goal for me, but I think that it’s feasible. It is, after all, only around 20,000 words a month which I know that I can do. The tricky thing is writing consistently throughout the year.

I'm a style blogger with a focus on aesthetics and the 13 Kibbe body types! (Profile picture made by AlohaSushicore via Picrew: https://picrew.me/image_maker/257476) View all posts by Rebekah Bechervaise